The push for more ADUs in the U.S.

As housing affordability and supply continue to dominate headlines, many forward-thinking experts and municipalities have turned their attention to enabling densification through accessory dwelling units (ADUs).

The National Association of Realtors (NAR) recently announced local programs that will enable smart densification and more affordable housing. In their proposal, they commit to the goal of providing local authorities with technical assistance, including a homeowners’ guide to building additional housing units and “navigating the complex permitting process that surrounds ADUs.”

In Amherst, MA, the city council is proposing streamlining the permitting process by allowing ADUs by right in most zoning categories, according to the Amherst Bulletin. One city Councilor is quoted as saying, “This is perhaps one of the sensible things we can do to make better use of the existing built environment that we have in Amherst.” The same strategy is being implemented in Arlington, VA.

According to Jared Brey of Next City, the town of Charleston, SC, approved an ordinance that allows city homeowners to build ADUs and garage apartments. “The law was part of a series of efforts to bring more affordable housing to the city, where, according to a 2020 report, half of renters and a third of homeowners are cost-burdened, home prices are rising faster than wages, and new supply falls well behind demand.” And, to complement the new zoning rules, Charleston plans to launch a program aimed at helping homeowners finance the construction of ADUs.

The private sector is also noticing, and business opportunities are opening up. Take Homestead, for instance, Dwell recently reported that this LA-based startup helps owners convert underutilized garages or backyard sheds into ADUs. These accessory units can then be rented out or lived in.

These changes aren’t without their opponents though, and in San Diego, following a recent change to the rules around ADUs, many are complaining about the construction of “eyesore” secondary units in their neighborhood. NIMBYism is everywhere.

New data from a number of outlets point to a slight slowdown in housing demand following record-breaking price increases and supply crunches. Redfin reported last week that the housing market continues to cool as mortgage rates increase above 3%, home tours have slowed to below 2020 levels, and the Mortgage Bankers Association’s home purchase index has declined 11% since the end of March. 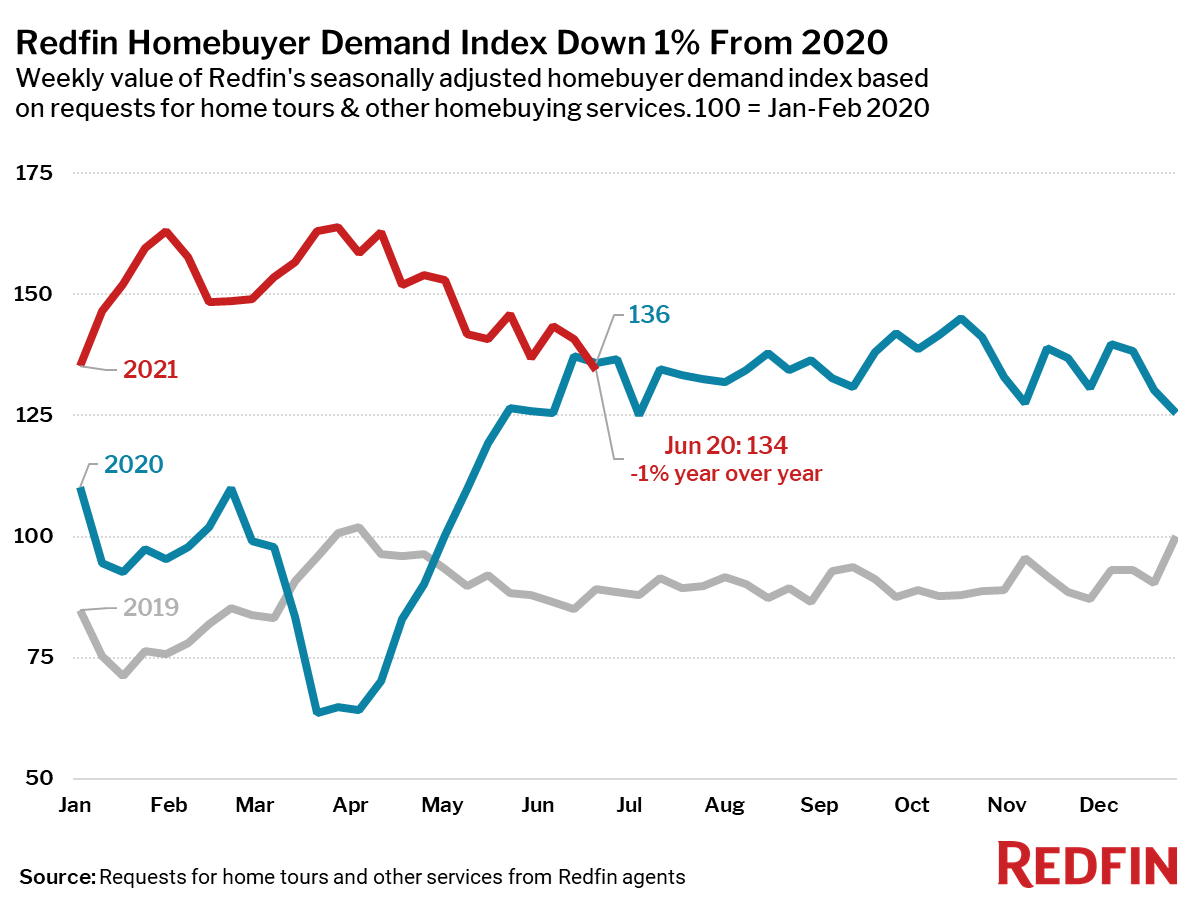 Despite this, Redfin notes that “the typical home sold for its highest price on record, at its fastest pace on record, and for 2.3% above list price, the largest sale price premium on record.”

According to Realtor.com, new listings are improving, adding much-needed supply to a tight real estate market. “New listings—a measure of homeowners listing properties for sale—continue to improve, rising 4% over last year. We have seen more new listings this year compared with 2020 in 11 of the last 13 weeks. The influx of new sellers over the last couple of months has been especially helpful in slowing price gains.”

Further, Realtor.com noted that this past week was the first time there was a moderation of the continued decline in time-on-market. “Buyers should still expect to act quickly on their desired homes, but we are seeing signs that the peak of the frenzy may soon be behind us.”

Robert Dietz of the National Association of Home Builders (NAHB) reports that material constraints led to a decline of 5.9% of newly constructed single-family homes in May.

Ashraf Khalil and Michael Casey from the Associated Press reported last week that the Centers for Disease Control and Prevention (CDC) extended the national ban on evictions for one more month, until July 31st. In their statement, the CDC noted that “this is intended to be the final extension of the moratorium.”

According to the article, as of March, 6.4 million households were behind on rent, and roughly 3.2 million people in June said they will likely face eviction in the next two months.

Diana Olick of CNBC reports on landlord groups reacting to the extension, which is seen as another blow to mom-and-pop investors. “Each passing month further escalates the risk of losing an ever-increasing amount of rental housing, ultimately jeopardizing the availability of safe, sustainable and affordable housing for all Americans,” says Bob Pinnegar, CEO of the National Apartment Association.

NAHB reacted to the announcement by reiterating the unlawfulness of this national eviction moratorium. “Recently, three separate federal courts have found that the CDC’s moratorium is unlawful. In NAHB’s case, the Northern District of Ohio found that Congress did not provide the CDC with the authority to issue such a moratorium.